“It’s time to duel!” CGC Trading Cards is ready for your Yu-Gi-Oh! cards.

In 1999, the Yu-Gi-Oh! trading card game sprang from the pages of the Japanese manga series where Yugi Mutou competed in the dangerous card game known as Duel Monsters. In the years that followed, the Yu-Gi-Oh! TCG attracted huge numbers of committed fans that propelled it to take a place among the top three TCGs in the world, alongside Pokémon and Magic: The Gathering.

At launch, CGC Trading Cards is grading all English Yu-Gi-Oh! cards from 2002 to present. CGC Trading Cards’ commitment to expert authentication and preservation of Yu-Gi-Oh! cards involved developing a display-worthy holder that accommodates the unique size of the cards. It ensures superior security and long-term protection, utilizing state-of-the-art design and construction.

Get your game on!

The Yu-Gi-Oh! TCG is part of a Yu-Gi-Oh! universe that touches more than 90 countries and includes a popular manga, nearly 1,000 anime video episodes and more than 100 million downloads of a mobile game. The Duel Monsters card game is central to the story told in the Yu-Gi-Oh! manga. The Yu-Gi-Oh! TCG was created to give fans a chance to play the same game they regularly saw their favorite characters playing. It appeared first in Japan in 1999, three years after the manga was launched, and came to the US in March 2002.

The Yu-Gi-Oh! anime, which launched in April 2002, also features the card game in its story arc. When story developments affected game play within the anime, they often brought related changes to the TCG. These included the introduction of new monsters and changes to game mechanics.

In general, the Yu-Gi-Oh! TCG uses a deck of 40 to 60 cards that include monster cards, spell cards and trap cards. Players are victorious when they coordinate a series of attacks that reduces an opponent’s Life Points to zero. Yu-Gi-Oh! cards come in “common” and “rare” varieties, with rare cards issued in variations including Collector’s Rare, which is printed with embossing, Starlight Rare, which is printed with rainbow foil, and Ghost Rare, which has a three dimensional effect. First edition printings and limited edition printings are identified by their gold security foil. Unlimited edition printings have silver security foil.

The cards most sought after by collectors are typically those issued in small printings to be given out at tournaments and other special events. However, there are also regularly issued cards that have become highly collectible, such as “Monster Reborn,” “Exodia the Forbidden One” and “Dark Magician” from the 2002 Legend of Blue-Eyes White Dragon expansion set and “Dark Magician Girl” from the 2003 Magician’s Force expansion set. And just like Pokémon has its Charizard and Magic has its Shivan Dragon, Yu-Gi-Oh! has a sought-after dragon as well: Blue Eyes White Dragon, which is one of the strongest cards to play and one of the most expensive cards to obtain.

Many consider “Tyler the Great Warrior,” which was issued in 2005, to be the rarest of Yu-Gi-Oh! cards. It was made for and named after Tyler Gressle, a young man fighting a rare form of liver cancer. Tyler’s Make-A-Wish Foundation request was to create his own Yu-Gi-Oh! card. Yu-Gi-Oh! made that wish come true.

“With the addition of Yu-Gi-Oh!, we are continuing to invest in providing the world’s best grading services for trading cards,” says Steven R. Eichenbaum, CEO of the Certified Collectibles Group, which includes CGC Trading Cards. “First the CGC Trading Cards Population Report, now Yu-Gi and there is still much more to come!”

CGC Trading Cards’ experts look forward to serving Yu-Gi-Oh! collectors with a consistent certification process and reliable assurances that their cards are genuine, accurately graded and well preserved. Send in your cards today!

Never submitted to CGC Trading Cards? It's easy! Learn how to submit cards >

Join CGC for free to add cards, track your collection and participate in the CGC Registry. Learn more > 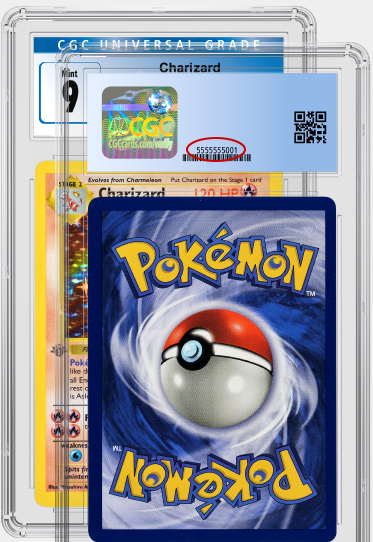